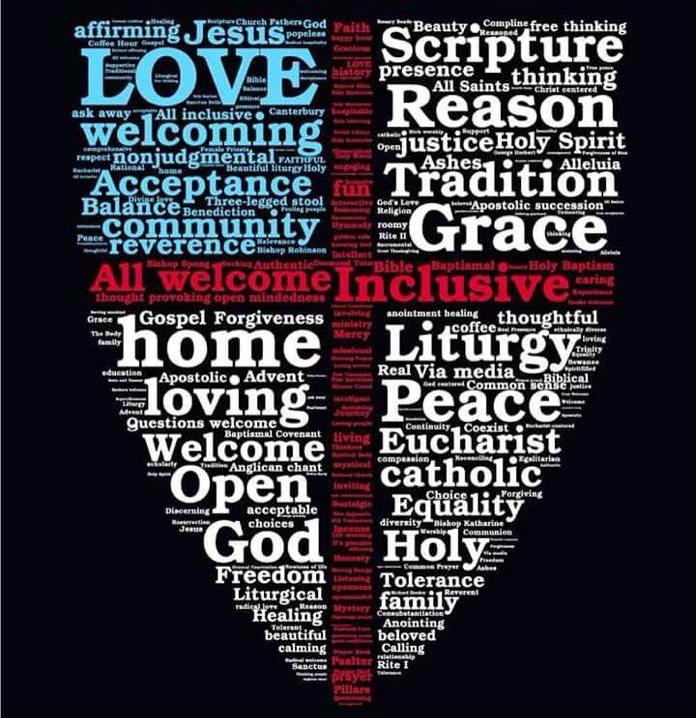 About the Episcopal Church

“Loving, Liberating and Life-giving – God is love, and God’s very being is a trinity of loving relationship: Father, Son and Holy Spirit. In Christ, God invites us to share that love; wherever there is pain or alienation, God longs to knit all people and creation back into wholeness and relationship.

If you watched the royal wedding of Prince Harry and Meghan Markel, you heard Bishop Michael Curry, the Episcopal Church’s first African-American leader, deliver a powerful sermon. He spoke of the power of loving redemption.  His sermon embodies the Episcopal Church.

What do we believe?

“We Episcopalians believe in a loving, liberating, and life-giving God: Father, Son, and Holy Spirit. As constituent members of the Anglican Communion in the United States, we are descendants of and partners with the Church of England and the Scottish Episcopal Church, – part of the third largest group of Christians in the world.

We believe in following the teachings of Jesus Christ, whose life, death, and resurrection saved the world.

Episcopalians have a legacy of inclusion, aspiring to tell and exemplify God’s love for every human being; women and men serve as bishops, priests, and deacons in our church. Laypeople and clergy cooperate as leaders at all levels of our church. Leadership is a gift from God, and can be expressed by all people in our church, regardless of sexual identity or orientation.”

God loves you – no exceptions.

Our Presiding Bishop is the Most Reverend Michael Curry, an active leader in of social justice, immigration policy and marriage equality.

Born in Chicago, IL, on March 13, 1953, Presiding Bishop Curry attended public schools in Buffalo, NY, and was graduated with high honors from Hobart College in Geneva, NY, in 1975. He received a Master of Divinity degree in 1978 from Yale University Divinity School in New Haven, CT. He has furthered his education with continued study at The College of Preachers, Princeton Theological Seminary, Wake Forest University, the Ecumenical Institute at St. Mary’s Seminary, and the Institute of Christian Jewish Studies.

Presiding Bishop Curry was ordained to the diaconate in June 1978, at St. Paul’s Cathedral, Buffalo, NY, by the Rt. Rev. Harold B. Robinson and to the priesthood in December 1978, at St. Stephen’s, Winston-Salem, NC, by the Rt. Rev. John M. Burgess. He began his ministry as deacon-in-charge at St. Stephen’s, Winston-Salem, in 1978 and was rector from 1979-1982. He next accepted a call as rector at St. Simon of Cyrene, Lincoln Heights, OH, serving from 1982-1988. In 1988 he was called to became rector of St. James’, Baltimore, MD, where he served until his election as the 11th Bishop of the Episcopal Diocese of North Carolina in February 2000. He is married to the former Sharon Clement, and they have two daughters, Rachel and Elizabeth.

For more information: The Episcopal Church